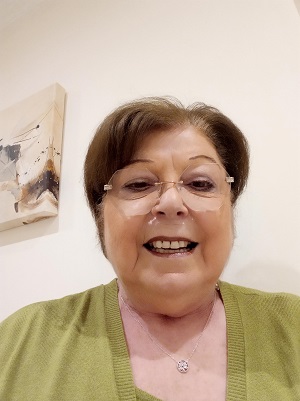 Tricia Kay, 74yrs, Stanmore, has Hypersensitivity Pneumonitis, diagnosed in 2012. Tricia talks about the impact of the APF Support Line in helping her with her diagnosis, through the pandemic.

Tricia was diagnosed at the end of 2012 and didn’t really consider the long-term prospects at that stage.  The degeneration was slow which allowed her to acclimatise to it. Tricia says it does restrict her from doing many things she would like to do. She can no longer fly as she’s on nightly oxygen and needs to take two large concentrators with her (one for back up). Tricia is on ambulatory oxygen during the day and can cope really well as she’s found portable units. She is determined to live as normal a life as possible.

Tricia talks about the impact of the APF Support Line:

When I was first contacted by Susan (my volunteer) it was like I had been in a foreign country and was meeting someone who finally spoke my language.

We were on the same page and she fully understood all the problems I had encountered with my condition including the hospital, doctors and medication.

I look forward to our frequent calls. I would go so far as to say we have become friends from my side. I feel I can 'let go' if there is anything I want to discuss which I would normally bottle up and keep from my family.

I would certainly recommend the service of a volunteer - they are not doctors, not family, not one of your long terms friends and you can talk openly to them which is so important.

What I miss the most about lockdown is not being with my children and four beautiful grandchildren and hugging them.  I have been shielding for ten months which is like a lifetime not being around them and almost a year in their lives (and mine) seems like an eternity.  I hope when this is all over this terrible absence will fade from their memory and we can close the gap and carry on where we left off last year.

I have written a blog since the beginning of the pandemic for my grandchildren with the news bulletins and my personal feelings so they will know what it was like first-hand - it is good for me and something for them to have as a memory.

I am just recording life as it happens with all its ups and downs and I have learned to take what you can from every challenge - and then write about it!

If you would like to get a call from APF, or volunteer as a patient ambassador yourself, please get in touch with our support line.