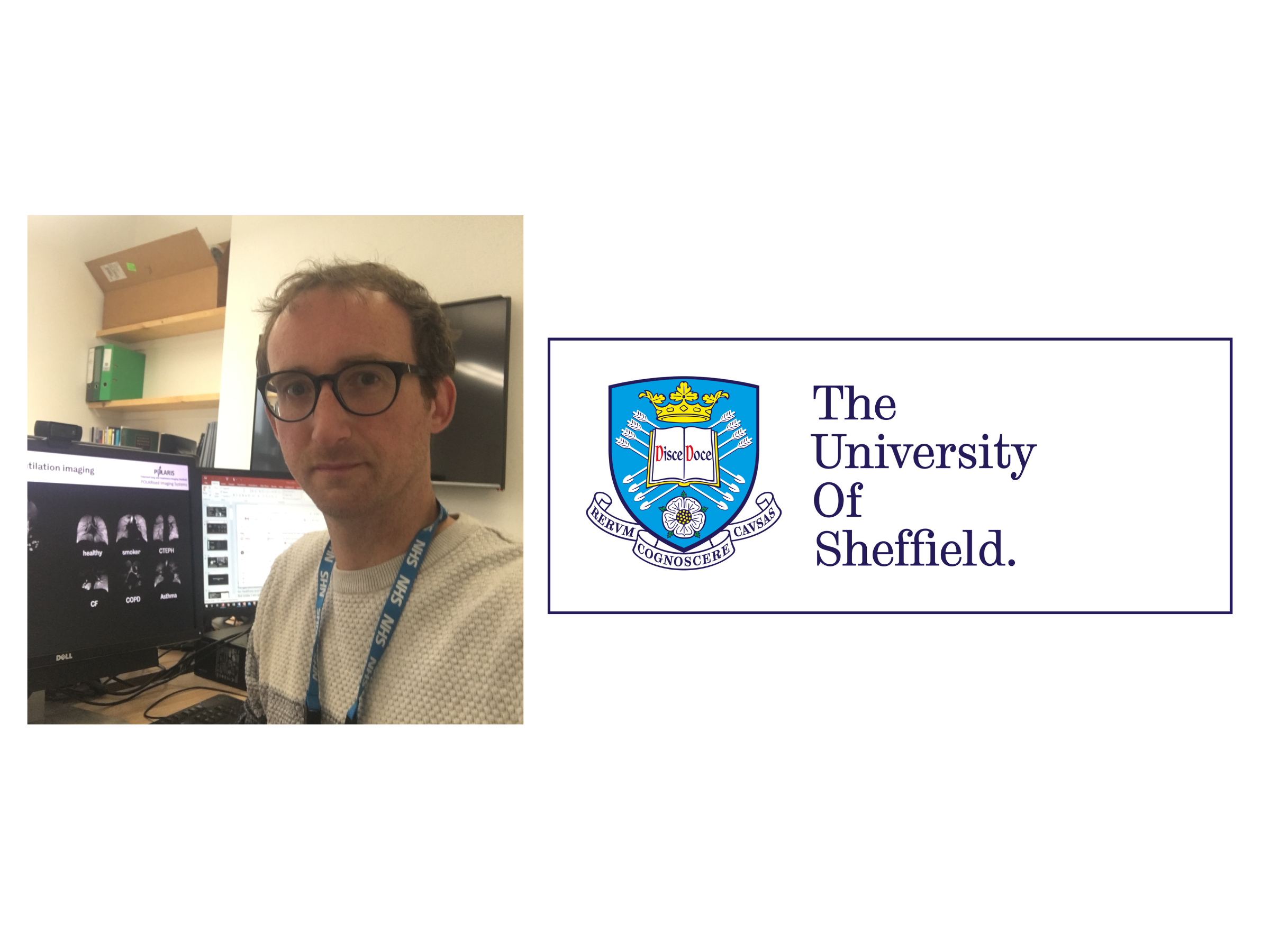 Learn about the exciting scientific advances in pulmonary fibrosis magnetic resonance imaging (MRI) that are changing the way we can view our lungs and understand how they are working.

Hello! My name is Guilhem Collier. I am a magnetic resonance research scientist originally from France, employed by the University of Sheffield.  I develop new ways to visualise the structure of the lungs and measure how well they are functioning.

‍"I have been working in the field of magnetic resonance imaging (MRI) of the lung with hyperpolarised gases since the start of my PhD project in Krakow, Poland. In 2012, I joined the POLARIS team in Sheffield who have been at the forefront of technical development and clinical applications of this technique. The main motivation for my work is to see my research achieve its clinical potential and have a real impact on improving patient’s lives. That is why it is so rewarding to work here in a multi-disciplinary team in Sheffield where this technique has been made available to clinicians.”

Why is lung imaging important?

If you or someone you know has been diagnosed with pulmonary fibrosis, it is likely that a high-resolution computerised tomography (HRCT) scan, which provides a detailed picture of the inside of the lungs, provided crucial information to help make a diagnosis.

Magnetic Resonance Imaging (MRI) is another imaging technique that can be used to investigate how the lungs look (their structure) and how they work (their function).  MRI does not cause exposure to ionising radiation which means the technique can be safely used to repeatedly monitor a patient’s condition over time.  At the moment, MRI is not standardly used to help diagnose or monitor the progression of pulmonary fibrosis.  However, the pioneering work that the POLARIS team is carrying out has led to exciting developments in this field.

“The POLARIS team of the Medical school of the University of Sheffield is led by Professor Jim Wild, an MRI physicist who has been working in the field of lung imaging for over 20 years. Our main area of research is the development of methods for clinical lung MRI with hyperpolarised xenon-129 gas. Thanks to our world leading expertise and research record in this area, some substantial grants and funding have been awarded (MRC grant MR/M008894/1 and NNIHR-RP-R3-12-027) to expand our infrastructures and focus on the clinical translation. This is how our original team of about 10 mostly technical physicists almost tripled in size and became a multi-disciplinary group of respiratory physiologists, medical doctors, MRI radiographers and image analysis experts.”

What is xenon MRI?

The methods that the POLARIS team develop involve highly complex physics. Broadly speaking, the technique requires a person to breathe in a harmless gas that has special properties, during an MRI scan.  The gas is called hyperpolarised xenon-129.  The inhaled gas travels into the person’s lungs and then into the bloodstream in a similar way that oxygen does.  The special properties of the gas mean that its movement within the lungs and into the bloodstream can be recorded during the MRI scan. The information recorded during the MRI scan can provide very detailed information about the structure and function of the person’s lungs.

Pulmonary fibrosis causes changes to a patient’s lungs, including stiffening and scarring to the lung.  The POLARIS team saw the valuable opportunity to apply their techniques to help better understand and monitor the progression of disease in pulmonary fibrosis.

“Idiopathic pulmonary fibrosis (IPF) became a clinical area of interest to us when we started investigating the full potential of xenon gas that can act as a surrogate for measuring regional gas transfer by diffusing through the lung parenchyma, dissolving into the blood and binding to the red blood cells. This method appeared to be really promising and to produce new biomarkers for monitoring disease progression in interstitial lung disease (ILD), particularly in IPF.”

The POLARIS team has strong links with respiratory consultants (such as Dr Stephen Bianchi) and pharmaceutical companies (such as Boehringer-Ingelheim and Galapagos) who are interested in the role of these cutting-edge imaging techniques to better understand how pulmonary fibrosis progresses, and how patients respond to different treatments.  The POLARIS team’s work has led to numerous clinical studies and collaborative projects which continue to advance the understanding and application of these techniques.

“Within the POLARIS team, Dr Neil Stewart developed a sensitive and reproducible MR technique to measure accurately gas transfer and septal thickness in the lung with xenon and observed a reduced and impaired gas transfer in subjects with IPF. More importantly, Dr Nicholas Weatherley, while following subjects with IPF over a two-year period, demonstrated that the measured xenon signal was sensitive to short-term changes (1-year) when the standard and advanced pulmonary function test outcome parameters (such as the diffusion factor for carbon monoxide, DLCO) was static over the same period of time.”

The POLARIS team have provided evidence that xenon MRI can be used effectively to show how well a person’s lungs are working.  Importantly, xenon MRI can detect changes in a patient’s lungs before these changes are apparent in standard pulmonary function tests.

In a recent study investigating the longer-term effects of COVID-19, patients reported persistent breathlessness, despite standard clinical tests suggesting that their lungs were normal.  However, by using xenon MRI, the POLARIS team and researchers from Oxford were able to show that these patients did have persistent lung damage. This is an exciting development because it suggests that disease progression, and potentially response to treatments, can be detected early and accurately using these sensitive techniques.  The ability to rapidly detect changes in disease progression is important in improving patient care and deciding whether a treatment is working well in a clinical trial.

The future of xenon MRI research

“We continue to develop and refine our techniques.  While previous techniques focussed on a global measurement of gas transfer or septal thickness for the whole lung, the subject of our more recent article featured here was the development of an imaging technique that is able to produce images of local xenon uptake in the lung parenchyma (the portion of the lung involved in gas-transfer) and local transfer to blood. It was the result of a team effort to improve the xenon signal magnitude and apply a new imaging technique with the help of our industrial collaborator General Electrics (GE). The results showed that the imaging measurements were well correlated with DLCO, that subjects with IPF had lower gas transfer (especially in the lower part of the lungs) and larger changes of capillary blood volume over the cardiac cycle. The results were in line with previously reported gas transfer values and support the understanding that fibrosis mostly occurs in the base and periphery of the lung.”

The POLARIS team continue to extend the capabilities of xenon MRI.  In patients with IPF, the technique can be used to visualise more specifically in the lung where changes in gas-transfer (how well oxygen can move from the air spaces in the lung to the blood) have occurred. The team have also discovered that the areas of the lung identified using xenon MRI with reduced gas-transfer are related to structural changes that can be seen on CT scans.

“Recently, my colleague Dr James Eaden, who is a respiratory registrar doing a PhD with us, has found a significant link between our gas transfer measurement and ILD-related structural imaging features from corresponding CT scans. He is now conducting a study to investigate if the various types of ILD have differences in the xenon MRI measurements, which could help with the diagnosis and monitoring of ILD. Determining the cause of a respiratory symptomatic deterioration in ILD (especially IPF) with standard pulmonary function tests is complex because these only provide a global measure of total lung parameters. As such, the use of regional imaging, which can more clearly identify specific areas of disease progression, may be useful both clinically and in future research studies.”

Xenon MRI is proving to be a powerful tool to better understand, monitor and support the treatment of pulmonary fibrosis.  We look forward to sharing the work of the POLARIS team with you again in the future.

You may also be interested in: Meet the scientist behind the research: Dr Anna Duckworth