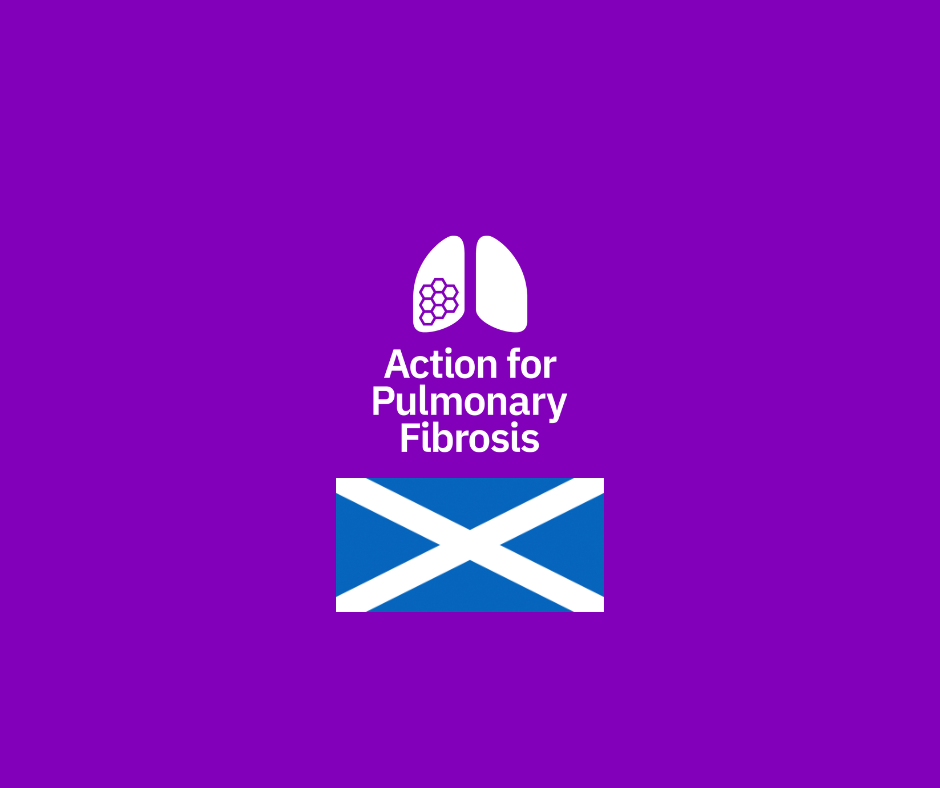 Watch back and listen in on our first ever virtual pulmonary fibrosis awareness event in Scotland, hosted by Action for Pulmonary Fibrosis.

- Learn more about what’s happening in Scotland for pulmonary fibrosis

- Hear from leading healthcare professionals and get an insight into the thoughts of patients and carers.

The official event recording will be available to watch, and accessible via this page in early December.‍‍

Feedback from people who attended:

This has been so very helpful for me because i have recently been diagnosed with PF and felt very confused and quite alone with the condition. It has given me hope for the future that your organisation is taking action on this condition. Thank you for all your care and hard work.

Steve was diagnosed with IPF in 2008 and lived with the disease for eight years before receiving a single lung transplant in March 2016.  He serves on the board of the European IPF Federation and believes that international collaboration will bring greater benefits to people affected by pulmonary fibrosis in the UK and beyond.

Alison joined APF in 2021 and has been working in the voluntary sector for the past 16 years, supporting service users, their carers and families.

Until early retirement Don, 59yrs, has been in primary education for 35 years and the last 11 as a Head Teacher. Don was diagnosed with Pulmonary Fibrosis in 2018 after becoming increasingly breathless and developed a worsening cough. He was prescribed ambulatory oxygen in June 2022 and this month was prescribed anti fibrotic medication.

Maureen cared for over seven years for husband Les who was diagnosed with IPF in 2012. Maureen is passionate about supporting others and raising awareness of pulmonary fibrosis. She has set up a support group, been involved in research and attends meetings of the Cross Party Group on Lung Health at the Scottish Parliament.

Professor Tom Fardon is a consultant physician in respiratory & general internal medicine at NHS Tayside, honorary professor with the University of Dundee and associate post graduate dean for the East of Scotland region of the Scottish Deanery. His national roles include chair of the national advisory group for respiratory medicine, he was the clinical lead for the respiratory care action plan for Scotland and is now the lead clinician for the Scottish Respiratory Advisory Committee, he is the Respiratory Specialty Delivery Group lead within the Centre for Sustainable Delivery.

He graduated from Cambridge University in 1999, and was awarded his MD from Cambridge in 2008,winning the Ralph Nobel Prize for his thesis "Optimising Anti-inflammatory Therapy in Atopic Asthma". Dr Fardon's clinical interests include difficult to control asthma, cystic fibrosis, non-CF bronchiectasis and chronic bronchial infection.‍

A day in life of two ILD Nurses

Susan qualified as a nurse in 1992 and has had a variety of roles working within NHS Greater Glasgow and Clyde. She joined the respiratory nurse specialist team in 2007 where she became interested in interstitial lung disease. She became an Interstitial Lung Disease Nurse Specialist in 2014, this was the first NHS funded ILD Nurse Specialist post in Scotland. She works closely with medical staff and other members of the respiratory team to support ILD patients in Glasgow.‍

‍> Watch our past webinars