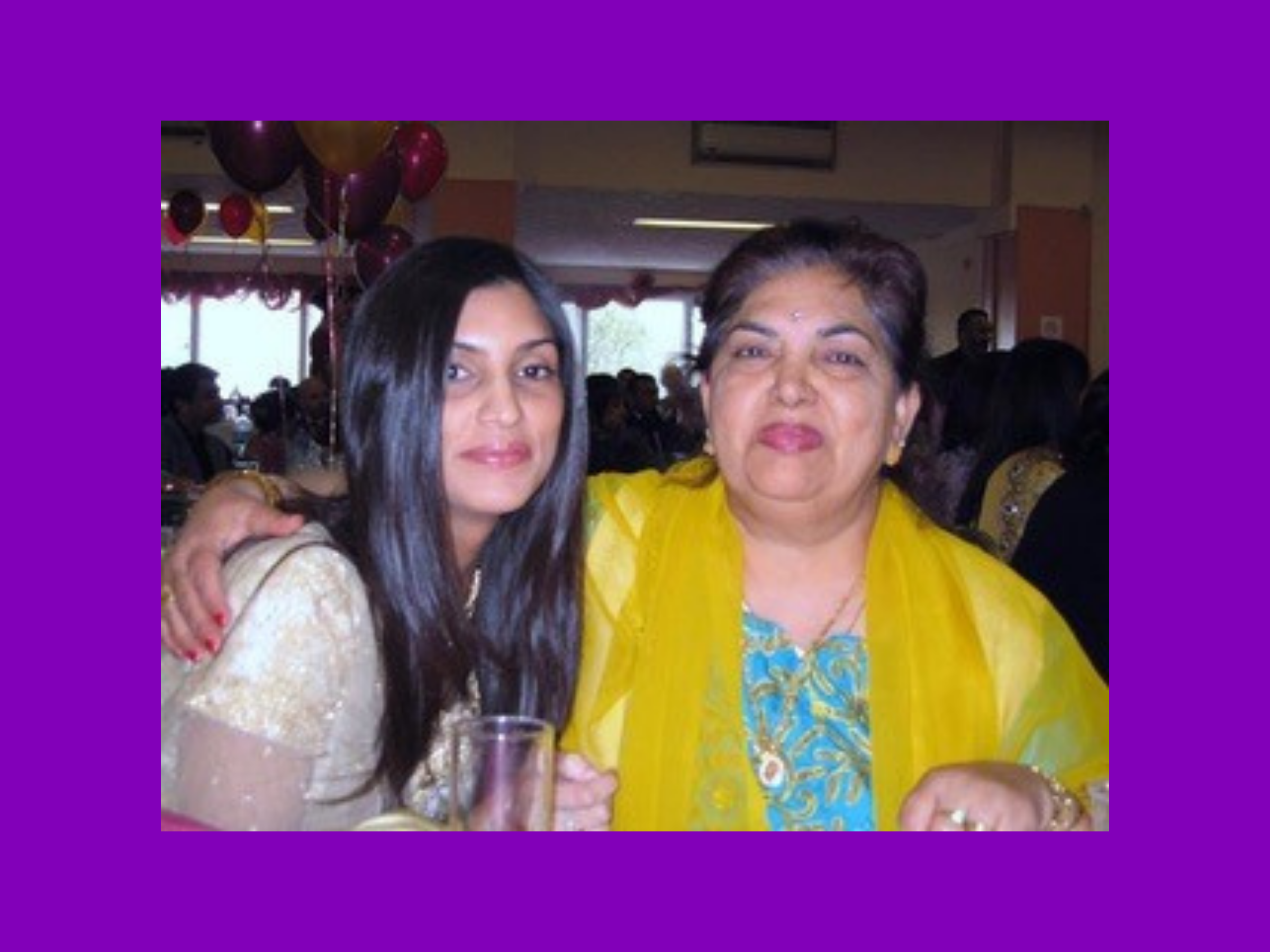 Remembering my mother by Ruby Rai: "My mum, Subita Rai, was diagnosed with PF in 2000 at the age of 52. This was around after a year to 18 months of repeated bouts of what her GP had said were chest infections..."

Mum was given many courses of antibiotics that didn’t work and slowly we saw her breathing was being affected. Prior to this, Mum was very active and I have fond memories of her always doing DIY, gardening and taking public transport to get around. She always loved to be out and about and was a very social creature. She would make friends with people on the bus and invite them home for tea! This was not a one off in our home!

It took around 2 weeks for her to be diagnosed after being taken to A&E at Hammersmith Hospital, London when she felt her breathing was not right. I remember being told at the time that her lungs were too weak for a biopsy to be done to confirm her diagnosis. Shortly after, she was given a prognosis of 5 years. This was a massive shock and we felt totally winded. It was unexplainable for us and felt surreal.

We were fortunate, just by luck, that mum was taken to A&E in Hammersmith by the ambulance. Dr Coker was the Consultant in charge for the Respiratory department and it soon became apparent that she was a leading specialist in PF. Dr Coker remained a huge support to mum, going above and beyond the role of a consultant right to the end. We, as a family cannot thank her and her team enough for all they did for mum.

We were a family of 6, with my three elder brothers and I living in Northolt, London. We knew nothing about PF when mum received her diagnosis and immediately researched it. Google was not kind and we couldn’t believe something so cruel and terminal was unheard of. Anyone we spoke to about PF also hadn’t heard about PF and we soon became educators. This really needs to change. There has to be more awareness and support for PF sufferers and their families.

Mum was such a strong character and didn’t complain about the cards she had been dealt in life. She took the diagnosis and prognosis in her stride or at least she conveyed that to us. On reflection, I wish we had asked her how she actually felt about it rather than assumed this because she was strong and came across as unfazed. I do feel that unlike cancer patients, PF sufferers do not receive the same emotional and mental support to help prepare them through the journey.

My advice to anyone that has a loved one with PF, is to have those talks about how they feel inside so this can be aired and addressed.

So often the person suffering with the condition feels they need to support and be strong for their families that they may not want to show their fear or say how scared they really are.

Explaining PF to anyone was a challenge. They assumed it was Cystic Fibrosis or Asthma. No one would make the connect that this was terminal and the ending was not pretty. This really needs to change as it’s deeply unfair and seems borderline discriminatory. Anyone going through PF needs to be supported and understood,  just like any other terminal illness. Getting any support for mum was hard because it felt like her condition was not taken seriously until it became dire.

Living with PF in the family

Mum carried on with living her life and for her, it was just a case of managing the logistics to allow her to do so. Whether that was get fit to fly tests when she visited me in Dubai or had trips to India, or taking her portable oxygen cylinders/concentrators to attend family functions. She even carried on when she was literally wheel chair bound if she left the home. Her strength and optimism did not break or weaken with PF.

As a family, we are very close and act almost like a team with each one of taking on a task/role/position. Mum’s illness became like a project that we managed together and I am so proud and grateful that my family came together like that. My dad quickly became the home support whilst mum was in hospital and would insist we ate as a family at the hospital with mum. Even if that meant eating with mum in the hospital ward communal area. Those times meant a lot to Mum and us. It was our little bit of normalcy in the whirlwind we were going through. I knew Dad was scared and as the ever joker he was, he hid this behind his laughs.

It soon became about logistics and practicalities and how our home would need to be adapted with a bedroom downstairs and wider door frames and ramps for wheel chair access. Luckily the full adaptations that were made were not fully needed, as mum remained able to walk around in the home with her aides such as walking sticks, Zimmer frames or her trusted eldest grandson that she adored.

We all cared for mum and took charge of certain things we could do for her.

But it was my eldest brother, Sanjeev that took the bulk of that responsibility. He took mum to her appointments, knew everything about her medication and tests and made sure she had what she needed at home on a day to day basis.

I would take mum away either on shopping trips or holidays so she could escape the constraints that PF gave her. I loved our time together, our talks and laughs. So many memories that were made and only because mum never took PF like a death sentence that it actually was.

I think mum coped by focusing on her family. She loved us all and her grandchildren were her world. She always wanted them around her and for her to be around them. I do feel part of her resilience was that she was not ready to give any of that up. She wanted to be around for as long as she could. To see them grow, raise and love them. I was lucky enough to see her have that bond with my son and I am so grateful for that.

Mum’s mentality was always embedded in gratitude. She never complained and was such a hard worker. She was a grafter and just worked through whatever she needed to. This mindset was totally applied to PF and she didn’t let PF defeat her or change her fundamental being.

Our mum is remembered fondly by so many people as a kind, patient and caring woman. She was strong without being cold or harsh and her take on life was phenomenal. I’ve met so many people in my life from all over the world and walks of life and have yet to find anyone like her. She was an absolute rare and unmatched woman. We are so proud of her and to be her children, it really is a privilege and blessing.