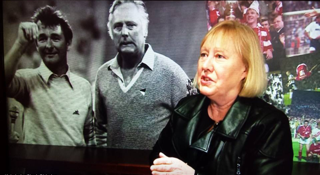 My Dad was diagnosed with Idiopathic Pulmonary Fibrosis in 1987 when he was just 59. At the time it was called Cryptogenic Fibrosing Alveolitis. What a mouthful! At first I – along with most other people except for the medics - had never heard of the disease. In a strange way, because of that, we didn’t worry overmuch. If it was so bad we’d all know about it. Right? Wrong.

My mum, Lilian, my brother, Phil and I were just thrilled it wasn’t cancer – he’d had a cough and back in those days a cough in an ex-smoker meant cancer. We were actually quite pleased. And, of course, this was pre-Google days so there wasn’t the avalanche of information that is available now on the Internet.

He was put on steroids and seemed instantly lots better – as you would be – so we just thought it was a treatable lung disease. He took part in early research at Nottingham’s Queen’s Medical Centre and asked his specialist to be introduced to another sufferer. It never happened. I don’t think they wanted dad to see what he would eventually become. The only shadow that crossed my mind in those early days was when I mentioned it to a medical friend who was involved with drug research – looking back, his face clouded over momentarily before he said something positive. He knew that Dad hadn’t got long. In fact, he died three years after diagnosis, on holiday with my Mum, his brother and three sisters and their partners at his holiday home in Mallorca. He’d never taken them all on holiday with him before. They all went for a month – did he know? If he did he never let on to us.

Dad was 62 when he died – a wonderful husband, father and grandfather, still missed on a daily basis by us all. He also happened to quite well known – as one half of the hugely successful footballing partnership of Clough & Taylor – former double European Cup winning managers at Nottingham Forest. He and his friend, Brian Clough, had played together at Middlesbrough in the 1950s and vowed one day to go into management together. I think they did pretty well!

The painful irony of seeing his slow physical deterioration was that he had been a fit and healthy professional sportsman – a 6’ 2” goalkeeper – and died while still in the prime of his life. This truly horrible disease - which scars the lungs, making them hard and unable to transfer oxygen into the body - robbed him of the ability to do the things he loved - walking, playing with his grandchildren and gardening - the normal, everyday things that we all should be able to enjoy. He loved walking. One of his favourites was the walk between the north and south bays at Scarborough – Marine Drive – particularly on a blustery, cold winter’s day. He once said, “ When I can’t walk around Marine Drive I’ll know I’ve shot it.” He was right.

As a family – isolated, bewildered and shocked – we had to watch dad degenerate into someone who could barely walk across the room. Even eating took too much breath and his once hearty appetite disappeared. The joke was that, sitting in a chair quietly, with his shock of lovely grey hair and handsome face, he looked the picture of health. The last time I saw him I’d dropped he and mum off at East Midlands Airport for that last, fatal holiday. I turned to wave as I walked away and he smiled at me as he caught his breath on a seat. The night before I was to pick them up a month later I had a call from my uncle to say he had died that evening. Going to the airport to pick up one parent when you expected two was such a cruel thing to have to do. I later discovered he hadn’t left the house for the whole month – spending his days talking over old times with his siblings and mum. That was a blessing I held on to.

Although I think about my dad every day I hadn’t ever actually thought much about the disease until eight years ago when I was asked to nominate a charity to benefit from a fundraising event. I chose the QMC at Nottingham.

When I visited the respiratory department I learned that over two decades on from when dad died the average life expectancy for IPF patients following diagnosis was still just three years. An absolute scandal.

I was truly shocked and, when asked to help set up a charity to support patients and families, I jumped at the chance to get involved. Action for Pulmonary Fibrosis was born. It is my dearest wish to be around when a cure is found and in the meantime, to help make life a little better for patients and families so that no-one has to go through what we did 30 years ago.

Thankfully, the treatment and care of people with PF is really excellent today and improving all the time. What is particularly heartening is the explosion of research across the world, including by our own two Mike Bray Research Fellows, funded by APF supporters

If you need information or support around any of the topics discussed, we can help. Get in touch today.