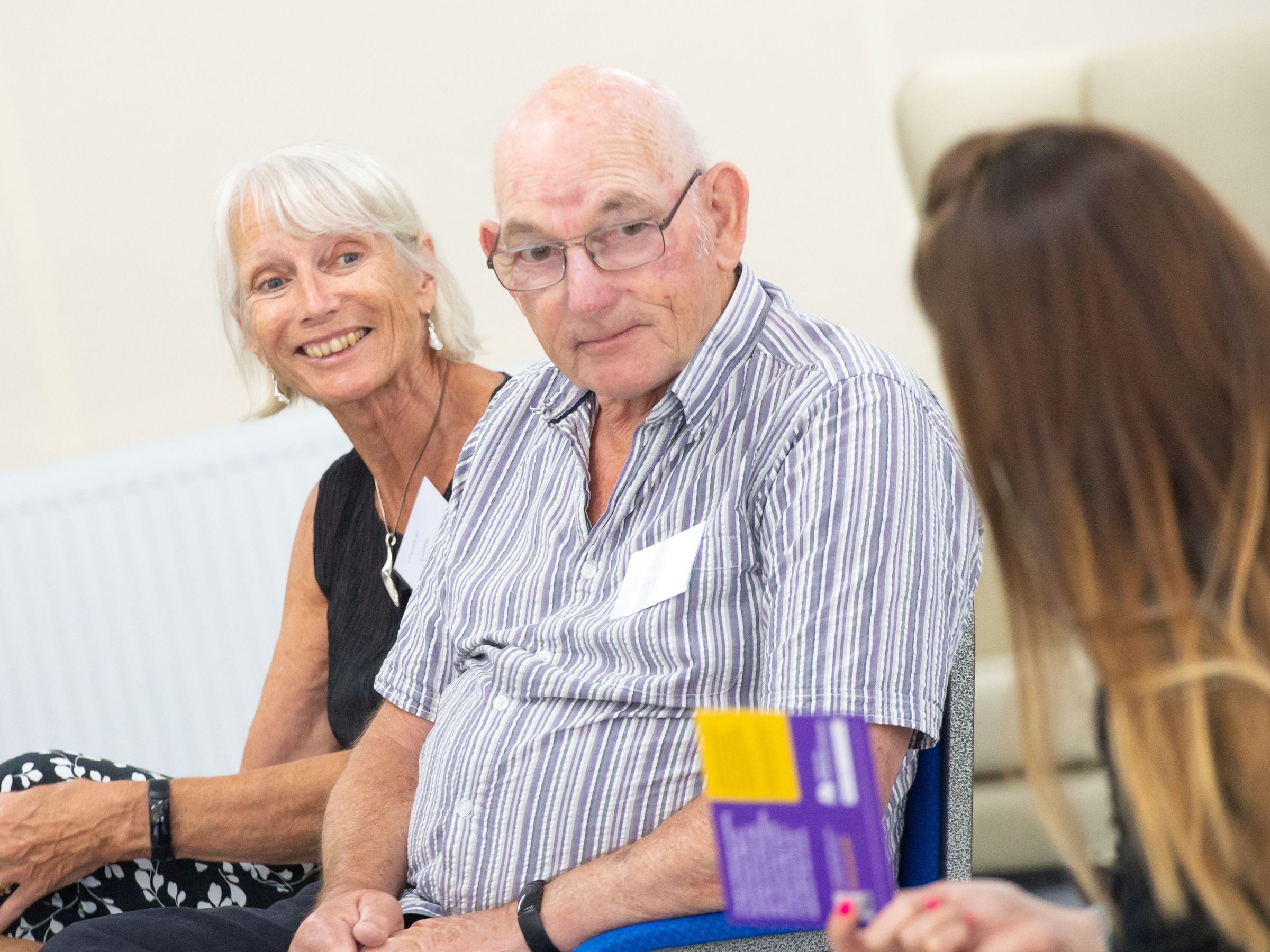 Register for our Virtual Patient Education Day delivered by Aintree Hospital, Liverpool and Royal Brompton and Harefield Hospital, London in collaboration with Action for Pulmonary Fibrosis.

Come and hear from top experts from across Merseyside and Royal Brompton and Harefield Hospital at a free day for anyone affected by pulmonary fibrosis.

Whether you’re a patient, carer, family member or friend this day is for you.

Hear from attendees of our virtual patient day 2021:

Suddenly someone has turned a light on. After years of no knowledge and fear or googling I have knowledge and hope. The combination of sessions was well judged and I found each and every one useful. I think it is a must to do again.

The empathy and professionalism touched my soul.  Thank you for that.

Sarah qualified in 1995 as registered nurse.  She worked in various specialities before becoming a ward sister of respiratory and palliative care ward in Halton. She has worked on the Respiratory rapid res

Sarah has been involved in numerous locally, nationally and internationally. She helped develop patient centred literature for pharmaceutical companies and dedicated charities and established a North West Allied Health Professionals network for the Region.

‍Andy has personal experience of life as a PF patient, having developed pulmonary fibrosis in his 40s and, following a 10 year journey, eventually receiving a life-saving double lung transplant in2018.  Andy now works as a regional support co-ordinate for APF.

Louise qualified as a lung consultant in 2018 and have been working at St Helens and Knowsley hospital since. Throughout her training to be a lung consultant in Merseyside Louise has always had an interest in ILD.  When the opportunity arose to take over as lead for ILD at St Helens and Knowsley hospitals she was excited to take this up.  Louise works closely with a team of Respiratory nurses who support ILD patients in many ways, including oxygen therapy.

Following core radiology training Professor Desai undertook research at Royal Brompton Hospital, under the supervision of Professor David Hansell (his predecessor in the post he now holds), being awarded an MD for his thesis on structural-functional correlations in fibrosing lung disease. Professor Desai was previously a consultant at King’s College Hospital in London where heworked for 18 years before returning to Royal Brompton Hospital.

Dr George has trained in interstitial lung disease at both Hammersmith and Royal Brompton Hospitals and spent time in the interstitial lung disease unit at the National Jewish Health Hospital in Denver, Colorado, considered by many to be the leading respiratory hospital in the United States. In November 2019, he was appointed respiratory speciality lead for the National Institute for Health Research(NIHR) North West London Clinical Research Network (CRN), where he will lead the delivery of and improve patient access to research in respiratory medicine.

Albert was diagnosed with IPF two years ago.  Albert and his wife Ann will talk about their experiences of living with PF.

Dr Kent is a Consultant Lung Doctor based at Liverpool University Hospitals NHS Foundation Trust.  He runs clinics in General Respiratory Medicine and has an interest in Interstitial Lung Disease.  He qualified in 2005 from Liverpool University having also completed a Masters degree in Medical Sciences.  Dr Kent particularly enjoys teaching and has undertaken a Postgraduate Certificate in Education.

Dr Key completed her degree in 2003 and since then she has worked in a variety of roles in Respiratory. She started in clinical trials in Manchester and then went on to complete a PhD looking at new methods for assessing IPF patients. Since 2009 she has worked a split role, as the deputy head of the Respiratory Department in University Hospital Aintree and working on academic research within the hospital. Angela has now taken on a senior clinical lecturer role in Edgehill University teaching medical students. ‍

Dr Helen Parfrey is a consultant Respiratory Physician at the Cambridge Interstitial Lung Disease Service, Royal Papworth Hospital and lead for East Anglia ILD Network. She completed her medical training at University of Oxford and obtained her PhD at University of Cambridge. She is a visiting senior research associate at University of Cambridge and has clinical and translational research interests in the role of the innate immune response in pulmonary fibrosis and RA-ILD. She is a founding trustee for Action for Pulmonary Fibrosis and a member of the European Pulmonary Fibrosis Foundation Scientific Advisory Board.

Dr Aravind Ponnuswamy is a consultant Respiratory Physician at the Countess of Chester Hospital and developed the  ILD service at Chester 10 years  ago . He completed his medical training India, South Wales and  Mersey Northwest and has published in ILD including a recent systematic review. He is  the respiratory system and speciality lead at the University of Liverpool School of Medicine .

Dr Alexandra Rice studied at the University of Cambridge, and obtained her medical degree in1994, followed by membership of the Royal College of Pathologists in 2002.

She has worked as a consultant since 2003, first at St Mary's Hospital, London with a specialist interest in lung and lymphoreticular pathology and was appointed to Royal Brompton Hospital in 2009.

Dr Sibley is a Consultant Respiratory Physician and has been delivering integrated care services for the local population for over 10 years.  She runs an Interstitial Lung Disease clinic weekly at Liverpool Heart and Chest Hospital. Sarah holds a number of leadership roles including; Clinical Lead for the Cheshire and Merseyside(C&M) Respiratory Clinical Network, Senior Responsible Officer for the C&M Board, North West Clinical Lead for the NHS@Home Programme and British Thoracic Society Integrated Care lead.

Anneliese is a respiratory consultant based at University Hospital Aintree. She started in post in January 2019 and has a sub-specialty interest in interstitial lung disease.

Dr Lisa Spencer MBE is a Consultant Lung Specialist and leads the Regional Liverpool Interstitial Lung Disease (ILD) Service. She has extensive experience as a clinical trials investigator leading >27 studies over the last 18years. She is a trustee and the current Honorary Secretary of the British Thoracic Society and a member of the Clinical Reference Group (CRG) for Specialised Respiratory Services for NHS England representing ILD nationally (a commissioning committee). She was the previous recent Chair of The British Thoracic Society national ILD Registry programme. She was awarded an MBE in the Queens Honours Birthday list 2021 for services to the NHS.

Jo completed her nurse training at Leeds General Infirmary in 1991 where she worked for 20 years in a variety of roles but always in the specialism of respiratory nursing both in the hospital and community setting. In 2008 Jo moved to Liverpool as a Respiratory Nurse Specialist in the oxygen service and then to ILD service where she has worked for the past 5 years.

Professor Athol Wells trained at Green Lane Hospital in Auckland, New Zealand. He came to Royal Brompton Hospital in 1989 for his post-graduate studies.

Louise joined APF in December 2018 after over 12 years as a CEO in the non-profit sector. She was inspired by the impact patients, carers and medical professionals were making to improve the lives of people with pulmonary fibrosis.

> Watch our past webinars online